Firstly I feel super lucky and honoured that I got the chance to pair with Maaret for my first session to kickoff my Testing Tour. I have been following her and had got few chances to speak to her regarding different conferences. She's amazing and the most important fact is that she takes out time from such a crazy busy schedule.

When I shared that I wanted to start my Testing Tour inspired by Lisi Hocke she offered to pair with me and teach me about strong style pairing. I could not believe that I was going to pair with Maaret and learn but at the same time, I got super nervous and scared too as the session day was getting closer. I wanted to make sure I have no distractions so I booked my session for a Saturday afternoon.


I had my first session on my #TestingTour with @maaretp. Did strong-style pairing 💪 and learned a lot, thanks for this session Maaret! pic.twitter.com/Q5S2zLRBup
— Parveen (@Parveen_Khan10) December 7, 2019

For me, it was the first time experience to use an animation app. Trust me I was very very nervous and scared when it started off. In fact this was the first time for both of us to use this app.
Once we decided what we wanted to explore, the next step was to understand strong style pairing where Maaret gave me a quick introduction to and explained to me how it works.
We both agreed on having a 5-minute timer so we can change our roles. As the strong style pairing has a driver and a navigator role so we decided with Maaret being the driver first and me being the navigator. Initially Maaret wanted to use Tuple tool for screen controlling but it dint work as it was supported only on Mac and I had Windows. Then I suggested if we could use zoom as I'm used to this tool for screensharing. It was really easy for us to swap our roles by using the screen control feature. As we were moving forwards we realised each time we were swapping our roles we were forgetting who was navigator and who was the driver for each session.

We used mindmup to take our notes and raise any bugs we found. As we both were new to this application so we decided to create an animation so we could get familiar with this application. As we were exploring we realised the app was very buggy and not very user-friendly. The more we were exploring we started to have a specific goal of which part we would like to explore. Like we picked up toolbar and cell features to explore and find bugs. We also used google search to find out what few specific terms meant so we could understand instead of assuming what it is as those terms were very specifically related to animation terminology. Initially, I tried hard to take notes so I can use those points while I'm writing this blog but could not focus on writing notes, being a navigator and driver.
I thought I'll concentrate on this app first and then I can write high-level notes straight after the session.

While we got more familiarised with the app, I wanted to merge two different animations, but we thought it's too complex so just skipped it. Later, we thought was not a good decision we made while we were doing our retrospective of the session. The more we were exploring it was turning out more interesting and fun activity. Infact we decided to have 2 more extra rounds of being driver and navigator and explore a bit more. Guess how many bugs we raised, 13 bugs hurray! As the list was bugs was growing we then decided to categorize the bugs instead of just listing them in a single long list. It was not just that we only raised bugs but we also raised some inconsistency notes and things which could be improved too. We also kept the description minimal while taking notes to save our time. 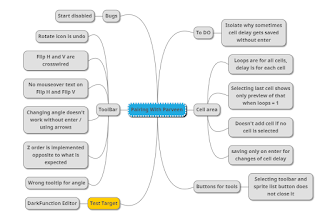 We kept the last 20 mins to reflect on our session and discuss what went well, what we learnt and what could have been planned well. During our retrospective, we realised that we should have been better at defining the purpose before we started off as it was a bit unclear. That's where I decided to keep this point in mind when I'm doing the sessions with other testers to make sure about communicating the objective of the session. This is where Maaret mentioned about her exploratory sessions being very intentional and planned.


I just learned that zoom has take control feature which means actually allowing people to pair/mob on a single computer. I was on the local one and wonder how was the accuracy on @Parveen_Khan10 side. I needed to learn that!
— Maaret Pyhäjärvi (@maaretp) December 7, 2019

I was part of @lisihocke starting her #TestingTour and now similarly a part of @Parveen_Khan10 getting started with her #TestingTour. Learning without physical borders, pairing online, allows us all to learn from one another. pic.twitter.com/4t63G5bcKq
— Maaret Pyhäjärvi (@maaretp) December 8, 2019

It was an amazing session and I'm hoping to have more sessions with different people on my journey. I'm still in the beginning of my journey, if you want to pair with me please DM me as my DM's are open I'll be happy to pair with you :D